Welcome to our guide on making a pedestrian claim. This article focuses on your rights regarding making a claim when you’re involved in a road traffic accident as a pedestrian.

Injuries that you sustain as a pedestrian involved in a road accident can have a significant effect on your physical and mental wellbeing. If your injuries were caused by the negligence of someone in control of a motor vehicle such as a car or motorcycle, then you may be entitled to compensation. 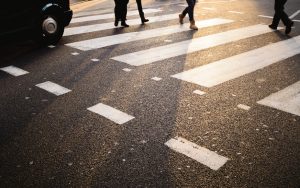 If you’re confused about the rules surrounding these kinds of claims, then our advisors are ready and waiting to assist you. We will be able to offer you more accurate guidance once we know more about the incident that caused your injuries.

Speaking with us directly is the best way to access our free legal advice. If we think you could have a valid pedestrian claim, we could connect you with an experienced personal injury lawyer from our panel.

Read on for more information, or to get in touch you can:

Can I Make A Pedestrian Claim For Being Run Over?

As of 29th January 2022, the Highway Code has been updated. These updates give priority to pedestrians; for example, drivers should now give way to pedestrians who are waiting to cross at a junction.

Pedestrians being hit by a motor vehicle can cause severe injuries; in some cases, this kind of accident can even cause death. If the accident was caused by the negligence of another road user, you may be able to claim.

However, the driver of the motor vehicle would not need to be completely at fault in order for a pedestrian to claim. In some cases, you may be able to make a “contributory negligence” claim. This is where the blame for the accident occurring is shared between multiple road users.

For example, a pedestrian may have been distracted by looking at their phone when they were run over. At the same time, the car that hit them may have been exceeding the speed limit. The liability, in this case, could be split.

This means that the injured pedestrian may only be awarded a portion of the full settlement amount. The compensation will be reduced according to the level of blame they’re considered to have in the accident occurring.

What Evidence Could Support Pedestrian Claims?

If you’ve been hit by a car or motorcycle and want to claim compensation for your injuries, you will need to gather evidence. This evidence will then need to be presented during the claims process.

The more pieces of evidence that you provide in support of your claim, the better. Some examples include:

Get in touch with us today for more examples of evidence that can be gathered to improve the chances of making a pedestrian claim. Our team of advisors can offer you free legal advice about claiming.

Who Is At Fault If You Are Run Over?

As mentioned earlier, there have been recent changes to the Highway Code that favour pedestrians. For example, pedestrians now have right of way at junctions.

However, there are scenarios in which the pedestrian could be to blame for an accident. For example, they may run out into the road with no warning in front of a driver who doesn’t have time to stop.

If you’re unsure whether you were at fault for the accident you were involved in, speak with a member of our team today. They can assess your pedestrian claim with no obligation for you to continue with our services.

What Injuries Could You Have Suffered?

As a pedestrian, you are afforded much less protection than drivers when you’re involved in road traffic accidents involving a motor vehicle. Those travelling in cars have the protection afforded by their vehicle, and motorcyclists wear protective equipment that reduces the risk of serious injury. However, pedestrians are unlikely to have these same protections.

Because of this, if you’re injured as a pedestrian, the damage can be quite severe. Pedestrian injury claims will tend to be worth more, the more serious the injuries are.

Some injuries that could be sustained are:

For more information on what injuries could form the basis of a pedestrian claim, get in touch with our team today.

Who Pays If You Are Run Over By An Untraced Or Uninsured Driver?

It’s a legal requirement according to the Road Traffic Act 1988 to stop if you’re involved in an accident that causes third party property damage or injury. Drivers involved in these incidents should also exchange the relevant details, for example, name and address.

If you are hit by an uninsured driver, or the driver flees the scene without providing their details (also known as a hit and run), then this doesn’t necessarily mean that you can’t make a claim.

In these circumstances, you could make a pedestrian claim through the Motor Insurers’ Bureau (MIB). This is an organisation that works alongside the police, insurers and the Driver and Vehicle Licensing Agency (DVLA) to reduce the number of uninsured drivers on the road. They can also compensate victims of accidents where the at-fault party doesn’t hold insurance or cannot be traced.

All drivers must have an insurance policy. This is a legal requirement. This is so that if they are involved in an accident, the injured party can claim compensation. This requirement is set out in Section 143 of the Road Traffic Act 1988.

As mentioned above, if you are hit by an uninsured driver, you can still make a claim through the MIB.

Claiming For Hit And Run Accidents

In addition to being hit by an uninsured driver, it’s also possible that you could be hit by a driver who hits you and flees the scene. As we’ve already mentioned, fleeing the scene of a car accident that has caused third-party injury or property damage is an offence.

However, as with cases of being hit by an uninsured driver, you could still be eligible to make a claim through the MIB.

The value of a pedestrian claim can vary depending on various factors. The amount that’s awarded to you to address your physical pain and mental suffering is known as general damages.

It’s calculated with the assistance of a publication called the Judicial College Guidelines (JCG). This document contains a range of different injuries alongside a guideline compensation bracket based on previous compensation awards that have been made.

We’ve included some example figures from the JCG in the table below. Remember, these figures are only guidelines.

You could also be awarded special damages as part of your claim. These are awarded to reimburse you for costs and financial losses experienced due to your injuries. Their intention is to return you to the financial position you were in before you were injured.

For example, you could receive compensation for a loss of earnings you’ve experienced or medical expenses you’ve had to pay for. However, you must be able to prove these expenditures with things like receipts and payslips.

One of our advisors could assess the value of your claim and tell you how much compensation you’re entitled to. Get in touch today; if your claim is valid, you could be connected with a No Win No Fee solicitor from our panel to work on your claim.

Why Make A No Win No Fee Pedestrian Claim

All of the personal injury solicitors from our panel can offer representation on a No Win No Fee basis. This is a way of funding legal representation.

They’ll deduct a percentage of your settlement, called a “success fee”, if you win your claim. This percentage is kept small by law.

If this is something that interests you, you can find out more by getting in touch with our team today. To speak with an advisor, you can:

Find out more on this topic by following the links below.

Thank you for reading our guide on making a pedestrian claim.